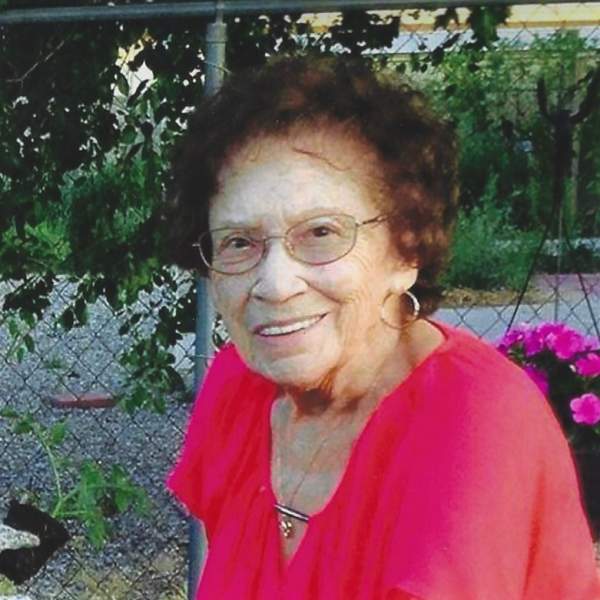 On February 7, 2021, God's loving arms received a special angel. Betty Jean Clark passed away at the age of 95. She departed this world surrounded by family members.

Betty was born July 16, 1925 in Beloit, Kansas. She was the second of six children born to Charles and Julia Bussart. The family made their home in the town of Wamego, Kansas.

While attending Wamego High School, Betty played Basketball, and she was a cheerleader. On a cold winter night, at a local dance hall she met the love of her heart, Pvt. James B. Clark. Jim was stationed at nearby Ft. Riley and every chance he got; he would hitch a ride into town to see Betty. It was a love story movies were made of. On June 4, 1944 (two days before D-Day), Jim and Betty were married in Lawton, Oklahoma. Shortly after, Jim was deployed to Germany.

The movie continued for 74 years, until Jim's death in 2018.
Betty and Jim raised four children. The family moved wherever and whenever the oil and gas fields called them. In 1960, Betty and Jim moved their family from Wichita Falls, TX to Farmington, NM. That would be their last move. They would forever call Farmington home.

In 1985, the retired couple built their "dream chalet" at Forest Lakes, Colorado. Later they acquired acreage in Mancos, Colorado. They made lifelong friends everywhere they went. They loved to travel, but Betty's true happiness came when she was with "her kids".

Betty was a busy homemaker and talented seamstress. She had a special talent for telling stories, and every child that knew her, would attest to the fact that her ghost stories were the utmost scariest. Betty was an avid bowler and enjoyed crafts and ceramics. She and Jim would dance at every opportunity to Classic Country Music. Betty loved playing cards. After a game of poker, she was usually the one who cashed in the most chips.

Besides being a super busy mother of four, Betty worked various jobs. Her last jobs before retirement were at New Mexico Tankers, and Harding Glass Company. She was a lifelong member of Post 2182 VFW auxiliary where Jim served as Post Commander. She loved watching the live-streamed church services provided by Desert Heights Church.

Viewing will be held at Farmington Funeral Home, Monday, February 15 at 12:00pm. Following the viewing, Betty will be laid to rest beside Jim, at 2:00pm in Memory Gardens, Farmington, NM. Pastor, Brent Heddin of Desert Heights Church will be officiating.

Those that she has left behind will rejoice that Betty is now with God and reunited with her forever love.

To order memorial trees or send flowers to the family in memory of Betty Clark, please visit our flower store.