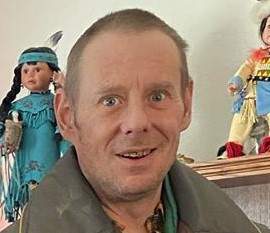 Brian Linward Burns passed away on March 15, 2020 after a 6 month battle with cancer. He was born on January 9th, 1973 in Silver City New Mexico to Robert “Bobby” Dale Burns and Leta Ann (Goldston) Burns. The family, to include brother Kevin Burns, lived in Tyrone, New Mexico. The family later moved to property near Silver City where Brian grew up and attended Silver Schools. Brian loved cooking, chemistry and being outside as child. He was active in 4-H and later participated in drama and acting in high school. He graduated Silver High School in 1991. He had many friends, traveled as a young adult and attended Western New Mexico University.

Brian was diagnosed with mental illness in his early 20’s and struggled with his illness throughout his adult life. Bobby and Leta cared for Brian until Bobby’s Illness and death forced a family decision to move Brian to the Farmington, New Mexico area to live near Kevin and his family in 2005. Kevin’s wife, Kiesha Burns, and her working knowledge of area resources helped the family connect Brian with vital mental health resources.

Brian is survived by his mother, Leta Burns, and brother, Kevin Burns. Leta Burns moved to Aztec, New Mexico in 2015 where she currently resides and assisted with Brian’s care along with other family and formal assistance.

Additional help came from Kevin and Kiesha’s children, Brittany, Brandon and Hailee, who were tasked from time to time with giving rides, dropping off food or money to Uncle Brian. Other assistance came in the form of healthcare personnel, friends and extended family (Jerry, Sharon and Kim Ammons we love you!). He loved art, food, cooking, Cokes, McDonald’s, iced coffee, being with family and giving gifts at Christmas.

Thank you to San Juan Regional Hospital Medical and Behavioral Health Staff, San Juan Oncology, UNM Medical and Cancer Hospital, Presbyterian Medical Services Behavioral Health Staff (specifically Consumer Support Services and Paula Jackson) and Basin Home Health Staff and Hospice Team. The family would like to thank those unnamed individuals who showed kindness and compassion to our Brian. He was, no doubt, a handful throughout his adult life and there are many who we will never be able to thank for the love and empathy shown to him outside our presence.

He was loved and will be missed.

To order memorial trees or send flowers to the family in memory of Brian Burns, please visit our flower store.