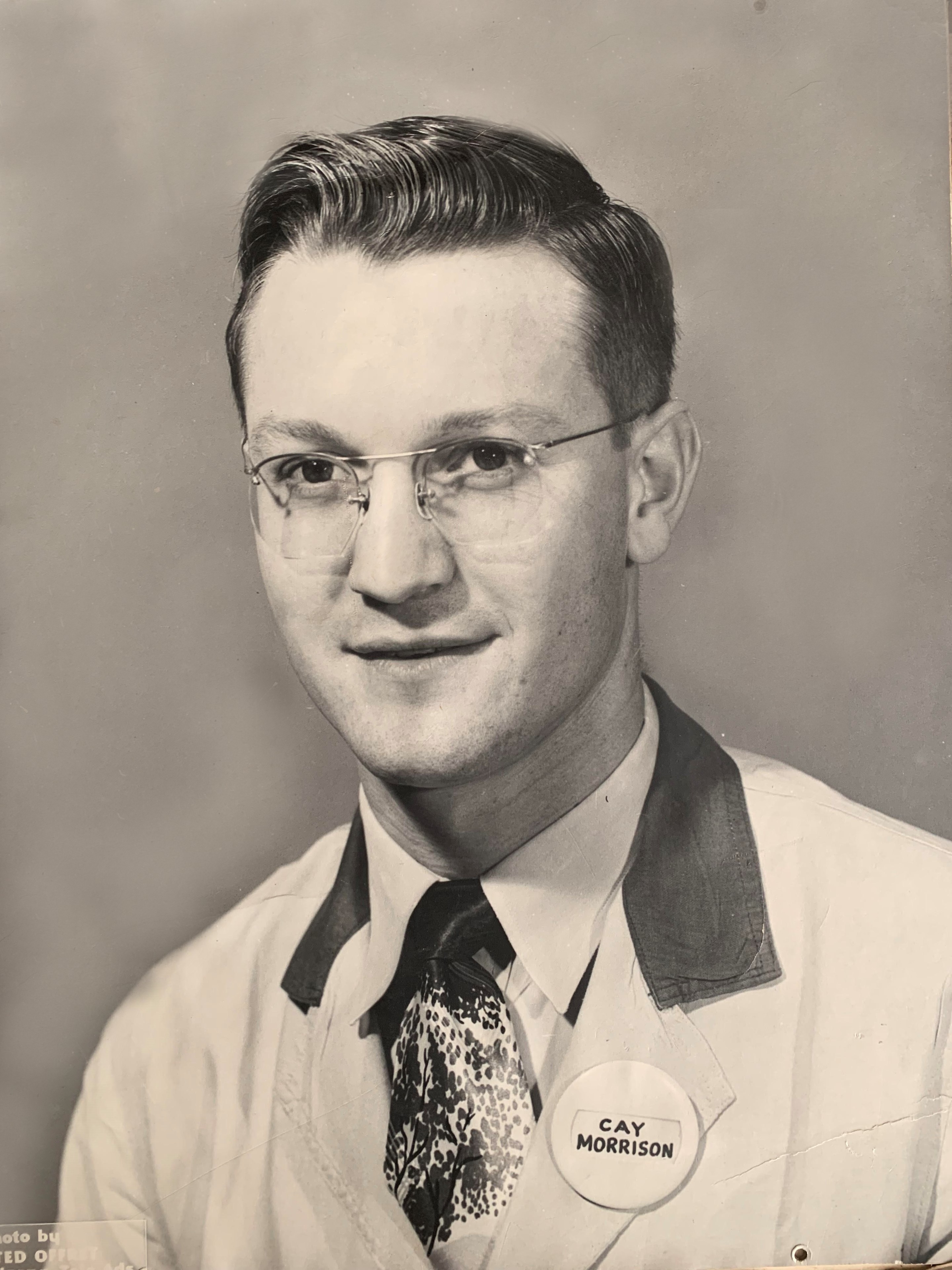 Cecil "Cay" Morrison was born to Cecil Cyrus Morrison and Maude Alice Hardy Morrison on May 10, 1928, joining his brother Jack Harlan in Picher, OK. Within months, the family sought greater opportunity in the Los Angeles area where Cay's recently widowed grandmother, Susie Brickey Morrison had purchased a home. "Angel" Cay sang in the famed Pasadena Boy's Choir, founded in 1925 by Dr. John Henry Lyons. When Cay was in 8th grade, the family relocated to Tucson, AZ, where Cay attended Tucson High where he excelled in team sports, notably football and developed lifelong friends, including future astronaut Frank Borman. He was recruited to the University of Arizona college football team but was strongly drawn to business. He was mentored by his maternal uncle, John Hardy, at the El Rancho Markets honing his managerial and operational skills. In 1949 he met and married the bright and beautiful coed, Daphne Lloyd Coggin of Bisbee, AZ. Within five and a half years they were blessed with sons Charles Curtis and George Wayne and daughters Susan Lynne and Leslie Anne. The young Morrison family then moved to Phoenix, AZ where Mayfair markets hired Cay to open new grocery stores around Arizona. In 1959, seeking more independence, the Morrisons joined Red and Barbara Pennington in Farmington, NM. Cay's parents and brother followed him to Boy's Supermarket and later Discount Markets on Ute Street and in the Valle Grande neighborhoods. Sixty two years later, Daphne and Cay still resided in Valle Grande. They shared great times with many valued employees, including Ernie Medina, Ronnie Jones, Bernard Haveley and many FHS students.

During the formative years of the family, Cay was a devoted husband, father and hardworking man. The entire family could be found on the slopes of the new Purgatory resort every winter and Navajo Lake in the summer speeding about on water skis, camping on the shores, and fishing from Cay's Toy -- Yac's Yot. When Cay and Daphne sold the store in 1970 to his brother Jack, Cay focused on investments and Cay Morrison Realty. Meanwhile, the kids went off to college and started their own families and lives, always visiting home as frequently as possible. Cay made numerous friendships. He was a member of the "Over the Hill" gang of dirt bike riders with Doug Foutz. He played friendly and competitive racquet sports, and fished and hunted with dear friends like Joe Abrams and Bob Erwin -- with whom he bought a rustic mountain retreat "Escondido". Cay and Daphne also traveled on roads, cruise ships and in the air, often with family which included Daphne's brother George and wife Elaine, to many of the United States including Hawaii and Alaska, and internationally to Canada, Mexico, Honduras, and Scotland. They loved hosting family at their beautiful Valle Grande home overlooking the Bisti and the river below as deer and turkeys grazed under the vast blue skies filled with soaring birds of prey and every July, with Tommy Bolack's fireworks. They loved their many special neighbors including the Allen and Clouthier families, and more recently, Ms. Pearl Atencio.

Cay was a member of Animas Masonic Lodge in Farmington and a 32nd degree Mason, of the Valley of Santa Fe, following in his father and brother's footsteps. Both sons were in DeMolay. His son Wayne excelled in New Mexico Masonic work. His daughter Susie, granddaughter Amanda were in and great granddaughter Chloee is in Rainbow girls. Grandson Mason, and great grandson Kayden were in DeMolay.

He is predeceased by his parents, brother, sisters-in-law and Daphne's parents. After a private service, the family will celebrate his wonderful life and mentorship where all are able to safely gather at camp Escondido. The family thanks Drs. Robert Burns, Ron Calcote, and Jude Gabaldon, all the caring family practice nurses (especially Sam), therapy staff (especially Sheri from Basin Home Health), and all the caring staff of PALS and Basin Hospice. In lieu of flowers, please share a favorite story about Cay or consider donating to your favorite charity in his memory.

To order memorial trees or send flowers to the family in memory of Cecil Morrison, please visit our flower store.
Send a Sympathy Card