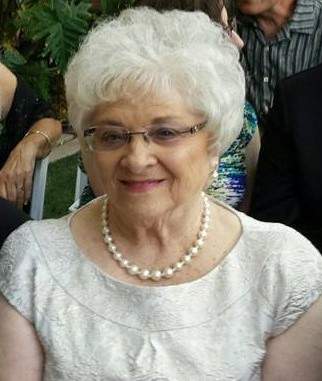 Charlene Cole, 83, of Farmington passed away Saturday, March 7, 2020 at SJRMC with her husband, Dr. Rosser R. Cole, holding her hand.
Charlene was born on October 31, 1936, in Henryetta, Oklahoma, the daughter of the late Charles L. and Helen K. (Bodzek) Blackmon.
Charlene was a 1954 graduate of Henryetta High School where she was a majorette in the State Champion band. She earned her RN degree from Mercy Hospital in Oklahoma City, Oklahoma in 1957, and worked several years as a public health visiting nurse, as well as working for several doctors in Oklahoma City.
On December 27, 1958 she married Rosser R. Cole at the First Presbyterian Church in Henryetta, Oklahoma. Dr. and Mrs. Cole moved to Farmington in 1967. For many years Charlene was an active member of the Farmington Junior Woman’s Club and was named outstanding Junior Woman of the year in 1974. She organized many health screening and vaccination programs for the Farmington Public Schools.
Charlene was proud of her efforts as a local fundraiser supporting the building of the Good Samaritan Nursing Facility in Aztec as well as raising funds for Childhaven. She worked as an RN for Nutrisystem and was always happy to help her husband, Rosser, in his ophthalmology practice. She was also active in the Republican party as a poll watcher for many years.
Charlene deeply loved her family, her friends and, of course, she loved her Oklahoma Sooners!
Surviving is her husband of 61 years, Rosser, and three daughters, Karen E. Cole of Littleton, CO, Kathy E. (James) Falconi of New River, AZ, and Kristi E. (Steve) Chouinard of Scottsdale, AZ, one brother, Charles L. (Judi) Blackmon of Carrollton, TX, two grandsons, Ryan A. Falconi and Noah D. Cole-Hassell, four granddaughters, Lauren E. (Travis) Rigby, Kaitlin A. (Dylan) Lane, Morgan A. Chouinard, and Brenna E. Cole-Hassell, two great granddaughters, Aubrey R. Lane and Skylar E. Lane, three nieces, Jennifer (Mark) Gribble, Jacque (David) Miles, and Lee (Nathan) Beaman. She was preceded in death by her parents and one sister, Libby Gragg.
Friends are invited to a memorial service on March 14, 2020 at St. John’s Episcopal Church, 312 N. Orchard Ave, Farmington, NM at 11:00 a.m. Charlene will be laid to rest at the West Lawn Cemetery in Henryetta, Oklahoma. In lieu of flowers, donations can be made to St. John’s Episcopal Church, 312 N. Orchard Ave., Farmington, or a cancer charity of your choice.
Arrangements are under the direction of Farmington Funeral Home.

To order memorial trees or send flowers to the family in memory of Charlene Cole, please visit our flower store.