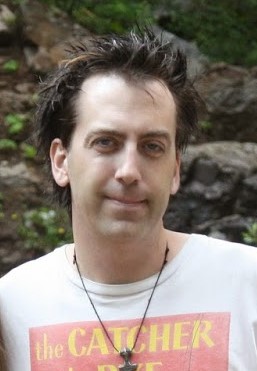 Christopher “Khris” Hunter Henderson, 42, passed away on Wednesday, January 20.
Chris was born May 5, 1978 to Susan and Larry Henderson in Farmington, New Mexico. He grew up in Bloomfield and attended Bloomfield schools. He later obtained his associate degree in liberal arts at San Juan College. He worked at Still Smokin’ for over 20 years, where he was known as the glue that held everything together, and was appreciated for his high intellect and willingness to take on any task that needed to be done.
Chris married the love of his life, Michelle Neylan-Henderson, in 2002, and enjoyed 16 years of marriage with her.
Chris was a talented artist, and enjoyed making music, making art, writing, and reading. He was the lead guitarist and singer in the local band Smoke for many years. He loved going to concerts and traveling, and spending time with his wife and son and his close friends and family. Every evening when he got home from work, he played with his beloved cat Marmalade before he did anything else.
Chris was known for his kind demeanor and gentle soul, and his warm hugs and easygoing nature will be sorely missed. He is survived by his son, Syd Neylan (Skye), of Albuquerque; mother, Susan Henderson, of Aztec; sister, Kim Henderson (Justin Barrett), of Idyllwild, Calif., and his brand-new niece, Tess Hunter. He was preceded in death by his father, Larry W. Henderson, and his wife, Michelle Neylan-Henderson.
A public viewing will be held Wednesday, February 3 from 11 a.m. to 1 p.m. at Farmington Funeral Home. A family graveside service will be held at Greenmount Cemetery in Durango, Colo. at a later date.

To order memorial trees or send flowers to the family in memory of Christopher Henderson, please visit our flower store.
Send a Sympathy Card