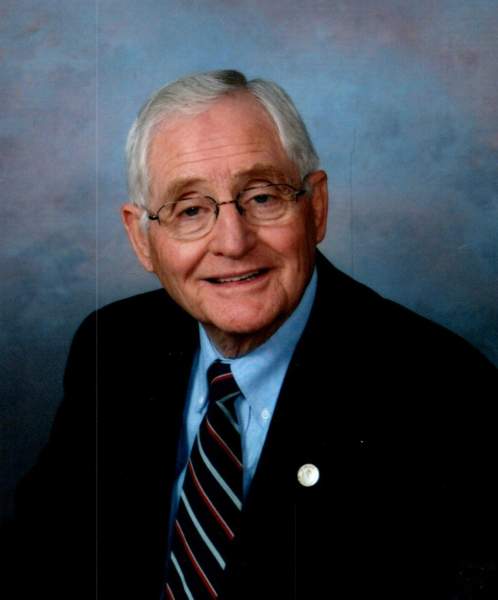 Dr. James C. Henderson age 87, of Farmington, New Mexico passed away March 17, 2020 in Farmington after a long battle with Alzheimer’s.  He was born to Dewey and Vina Henderson in Durango, Colorado on March 13, 1933.

James married Tycie Jameson on February 5, 1956.  They traveled many miles together over the next 64 years.  Starting out in Ajo, Arizona, they moved to Flagstaff, Arizona where Dr. Henderson received his Master’s Degree at Northern Arizona University.  In 1959 they relocated to Douglas, Arizona where he taught at the Douglas Public Schools and was elected Cochise County School Superintendent in 1962.  In 1966, James accepted the position of Superintendent of Willcox, Arizona Public Schools.  He resigned from the Superintendent post in 1974 to return to the University of Arizona where he completed his doctorate of education degree in 1975.

He moved to Farmington in 1975 to assume the leadership of San Juan College.  Starting as the campus director, he began early on forging the small branch of New Mexico State University to acquire its own identity.  He lobbied legislators, told his story to countless people and shared his vision of a community college that would provide educational and career opportunities to people in the Four Corners region and beyond.  In 1982, San Juan College became an independent community college and Dr. Henderson was named its first president.  He continued in that capacity until his retirement in 2003, but remained with the college as Chancellor Emeritus for an additional year working in various capacities.

James attended Riverstone Methodist Church in Farmington where he sat on numerous committees over the past 44 years.

A privatized funeral service will be held at 11:00 a.m. on Friday March 20 at Riverstone Methodist Church, 808 North Monterey Avenue.  A private family burial will follow at Memory Gardens Cemetery, 6917 East Main Street. There will be a broadcast of the service available at www.sanjuancollege.edu shortly after the service.

Contributions to Alzheimer’s research would be appreciated in lieu of flowers.  www.alz.org/newmexico

Note:  There will be a visitation at the church at 10:00am prior to the funeral service.  Due to heightened precautions now in place concerning the COVID-19 virus, the family will not be present at visitation and will not be interacting with guests at the services at the church.  We are sorry for the inconvenience but please know that we feel your love, support, thoughts and prayers.

To order memorial trees or send flowers to the family in memory of Dr. James Henderson, please visit our flower store.