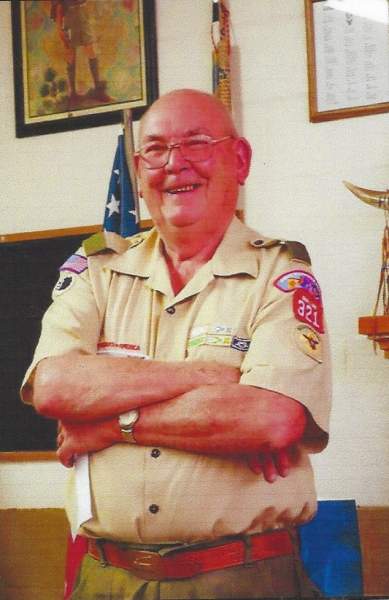 Edward Milburn "Mac" McNamee, age 90, of Farmington, NM, embarked on his final adventure on August 14, 2022. Surrounded by friends and family, he tied his last knots, sang his last songs, and left for the last time. Mac was born Dec. 19, 1931, to Edward Charles McNamee and Vera Elizabeth McNamee (Sands) of La Plata, their only child. Raised on the family farm, Mac had stories of school buses with no floors, coal mining for the family coal, B-52's crashing close by, and coyote and rattlesnake encounters.

The family moved into Farmington and built a house on Dustin. Mac started work at a local dairy when was 14 and delivered papers after school. At 17, he joined the National Guard and at 18 enlisted in the Army. He was sent to Germany after World War II. He loved to tell the story of the troop transport that took his unit across the Atlantic. Spaghetti was the main, if not only, meal. There were two movies, "High Noon", which was switched midway through the voyage for "Alice in Wonderland" in Norwegian. When the ship finally docked months later, it simply broke in half. That was the beginning of a wild adventure that shaped his adulthood in many ways. He was wounded by WWII ordinance while in Germany, almost losing his leg, and carried that wound and the consequences for the rest of his life. There were good times too, like his unit getting stuck on the Baltic with no food or gasoline.

Mac married Frances Cox of Los Alamos, NM, in 1953. They made their home in Farmington, eventually adding three children, Vera (Burright), Ed, and Marianne (May). Mac worked construction and the oilfield but wound up with a long career at Creamland Dairies as a routeman and a supervisor. He told stories of a snowstorm so bad he had to survive in a snow cave for seven days outside of Chinle, AZ, of pushing a bread truck through the snow with his milk truck to get food to the children at a snowed-in school, of killer chihuahuas, and mad monkeys.

For Mac, the greatest achievement of his life was his services to the community beginning with Boy Scout Troop 321. His wife, Frances, volunteered him in his absence to lead the troop in 1972. He "retired" in 2014. Under his leadership, 84 young men became Eagle Scouts. One Scout summed up Mac's whole career by saying, "I was not a good boy, but Mac made me a good man," Other Scouts, leaders, and parents have said that they were better people for Mac's influence and example. There were stories of boys in trees who had to be talked down, boys who ate ants at Scout camp and flourished at the Air force Academy as a result, and boys and leaders who hiked, camped, talked, and grew.

His service expanded to membership in the Farmington Evening Lions and the Elks Lodge. All three organizations often found themselves working with each other under his leadership. There were Mother's Day pancake breakfasts the Lions sponsored with the Boy Scouts helping with the cooking and serving. Many Eagle Scout projects involved Lion or Elk areas.

For those who knew and loved him, Mac and Old Blue loaded the trailer one last time and left us to tell each other all the stories of a life will-lived by a man well-loved.

Thank you to the staff at San Juan Regional Medical Center for their kind and compassionate care. In lieu of flowers, please make a donation in Mac's name to the charity of your choice.

To order memorial trees or send flowers to the family in memory of Edward Milburn McNamee, please visit our flower store.