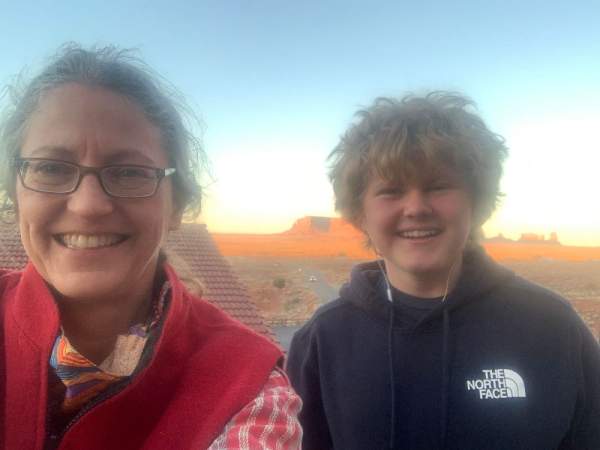 Before there were screensavers and laptops, there was the endless blue southwestern sky. And somewhere underneath it, a path ambling toward the golden bluffs. Eleanor Jayne tried living elsewhere once. She explored further East with her sister, but the draw didn't last. Like a bird that migrates toward golden light, she followed her rainbow back to the west coast, and then to the Four Corners. Driving an orange VW bus with her three daughters in tow, Eleanor made a home nestled in New Mexico's timeless landscape- a rural life that included a much-loved menagerie of animals, nature, family, and friends.

Eleanor Jayne Norman Kelly died on April 28, 2022, in Aztec, at age 82. A lifelong community servant, she was best known as Nurse Kelly at Farmington High School, where she provided band-aids, kept students healthy, and supported colleagues for over 30 years. A softie for orphans and castaways, Eleanor could not resist a furry face wanting shelter or a teenager in need of a good spaghetti dinner.

Enamored with her hobby farm, she filled her after-work hours and weekends making things grow. For years, she had an old-fashioned plow she used to prep the garden, powered by a half-draft horse named Buddy, wearing a harness from Eleanor's childhood family farm in Kansas. A creative seamstress with a flair for design, Eleanor crafted prom dresses, school clothes, and dozens of costumes for her daughters and grandchildren to wear in parades. She worked on assorted projects after retiring from FHS. At 65 she entered the Building Trades Program at San Juan College and upon completion, she purchased the house the class built. She then placed her new home on an unimproved 10-acre lot and lived in it for the rest of her life, constructing fences, installing irrigation, and planting trees to make her own green paradise.

Whether on horseback or on skis, Eleanor was exuberant in her pursuit of fun. She had great admiration for the windblown and sunburned, thus New Mexico suited her just fine. Her indomitable work ethic kept her employed from Alta Bates Hospital in Oakland, California to San Juan Regional Medical Center and FHS in between.

Eleanor walked the walk in her commitment to conservation and social justice. She marched with Dr. Martin Luther King Jr. in Fresno, sat in with the occupy protests, and always hung her laundry out to dry. She was frugal so she could be generous to support causes she believed in.

Eleanor was a great cook as well. Her enchiladas were a staple of family gatherings and her Madeira cake recipe will be made as a tribute to her in to the future. She loved making gingerbread people (never just men) every Christmas season. No one enjoyed a good watermelon more than Eleanor. Many a horse learned to love melon rinds standing at a fence with her.

Purgatory, Yosemite or Whitefish Lake, Eleanor always found a way to take full advantage of any outside adventure available. She packed an awesome picnic and led the group of kids and cousins on a hike, swim or ride to earn the meal. Eleanor taught horses to trust, dogs to mind, and kids to stand up, shake it off and try again.

Eleanor was born in Colorado Springs in 1939 to Frank Norman of Haskell County, Texas, and Billie Streiff of Lane County, Kansas. The pair set out from Dodge City and soon had two daughters, Sydney Jo and Eleanor Jayne. They settled in Farmington in the 1940s and both daughters graduated from Farmington High School. Eleanor attended the University of New Mexico and then transferred to The University of Colorado to join the Nursing School Class of 1957. She was proud of her BS in Nursing having recently read that it is the most rigorous training of all bachelor's degrees. Eleanor continued her formal education by achieving a LPN in 1980. She was also a member of the Kappa Kappa Gamma Sorority while at UNM. She moved to San Francisco after graduation to work as a nurse at the Free Clinic in Haight Ashbury where she met John Patrick Kelly. They were married in Las Vegas in 1962. Three daughters and one divorce later, Eleanor moved back to New Mexico in 1979.

In lieu of flowers please make a contribution to Turquoise Paw. Turquoise Paw exists with a mission to rescue animals within the borders of the Navajo Nation to support efforts in population control and education and most importantly, to provide the humane choice of no-kill sheltering

To order memorial trees or send flowers to the family in memory of Eleanor Jayne Kelly, please visit our flower store.