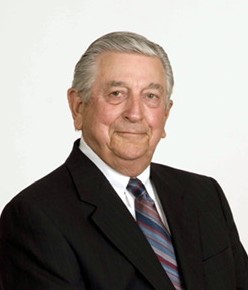 Frank Macaluso,89, passed away on Oct 31 at his home, surrounded by his family. He was preceded in death by his wife of 59 years, Peggy. Frank was born in Cheyenne Wyoming to Frank and Thelma Macaluso. He earned a bachelor’s degree in business administration from Regis University in Denver.

Frank began and ended his career as a banker. He moved to Farmington in 1952 and worked for Citizens Bank in Aztec. He organized Valley Bank of Farmington in 1974 which later became part of Bank of America. Frank served as director and chairman of Sunwest Bank, a 78 million operation in Farmington for 23 years. He was director of Sunwest Financial Services for five years. In 2000, he organized Four Corners Community Bank, that he watched grow with pride. He served as Chairman of the Board for FCCB until his death.

In 1959 Frank founded Macaluso Oil Company, a petroleum product distributor. In 2000 the company expanded to Albuquerque and Santa Fe and became Amigo Petroleum Company. The company was sold to Giant Industries 2006.

Throughout the years Frank served on the Governor’s Business Advisory Council, the New Mexico Board of Finance, and the University of New Mexico Foundation. He was President of the New Mexico Petroleum Association, he was also a New Mexican Amigo.

Frank Macaluso was a man of great conviction and integrity. He will be greatly missed and always loved by his family. Frank is survived by four daughters; Anne Foust, Beth Nance, Margaret Walters, Teresa Macaluso, and one son, Frank Macaluso Jr. His family also includes 16 grandchildren and 33 great-grandchildren.

Due to the current restrictions, the family will have a private mass at Sacred Heart Church, with a celebration of life at a later date. In lieu of flowers, the family ask anyone who would like to honor Frank to donate to Four Corners Foundation (PATH) at PO Box 5160, Farmington, NM 87499. Those wishing to leave condolences may do so at farmingtonfuneral.com.

To order memorial trees or send flowers to the family in memory of Frank Macaluso, please visit our flower store.
Send a Sympathy Card