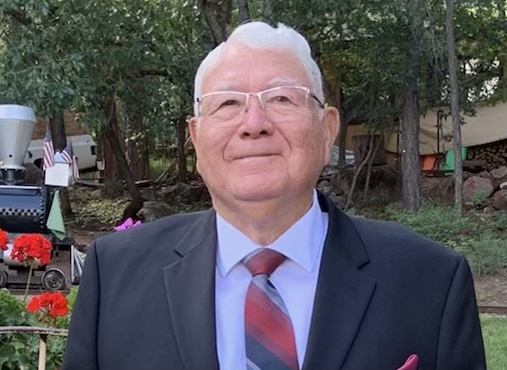 Our beloved "Eddie" passed from this life Saturday, August 27, 2022, at home in the loving care of his family. Frank was born December 3, 1938, to Felipe and Josephine Schaffer in Hot Springs, New Mexico. Born into a humble, devout home, Frank was a unique personality that valued work ethic, gardening and dedication to family. Frank inherited stewardship of his family at the early age of 18. He dedicated himself to this task while serving his country in the Army National Guard for over 6 years. Frank was the definition of "Faithful" to all who knew him.

He met the love of his life, Carolyn, while working for the State of Highway Department. They married in 1962, and started a family of 3 kids, 8 grandchildren and 5 great grandkids. They spend most of their young lives in Hobbs, NM, where Frank continued his career in power generation. In 1976, opportunity brought the Schaffers' to Farmington, where Frank would eventually retire from the Public Service Company of New Mexico. He continued his career and provided electricity to some of the most impoverished places in the world. His bilingual abilities and fierce work ethic made him a favorite with recruiters. Frank never took a sick day throughout his entire work career.

Eddie was ingenious in his creative up-cycling, was never wasteful. He always composted. He never took anything for granted. He was grateful and humble. He was an avid hunter, a patriot and devout Christian. He served as the father figure, not only for his siblings, but also for his grand sons who lost their own father at an early age. His example is reflected in the lives of all he influenced. Frank was slow to accept anything less than excellence, but Eddie was fast to forgive.

Services for Frank are in the care of Farmington Funeral Home. Visitation with the Family will be from 6-7 pm, at Farmington Funeral Home, Thursday, September 1st. Rosary will be recited at Sacred Heart Parish, Friday, September 2, 2022, at 9:30, with Mass to follow. Richard Lee, son in law, and grandsons, Justin and Nick Holland, Tyler, Carson, and Luke Evans will serve as pallbearers to his interment at Greenlawn Cemetery immediately following.

"Make me an instrument of Your peace"-St. Francis of Assisi, Eddie's favorite prayer

To order memorial trees or send flowers to the family in memory of Frank Schaffer, please visit our flower store.