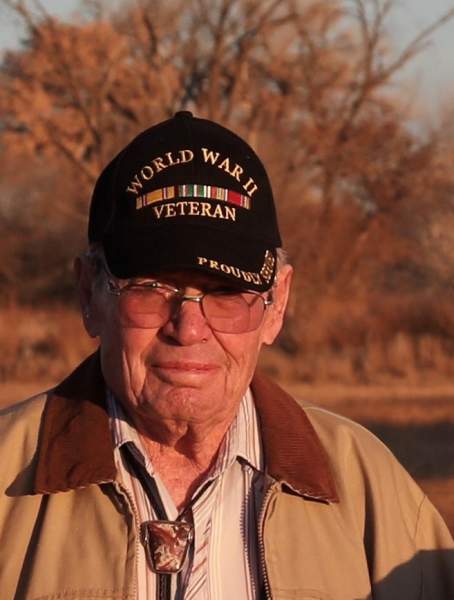 Our beloved patriarch and hero, Jesse Baron (J.B.) Kight left us on November 4, 2021. J.B. was born February 28, 1923, in Duncan, OK. He was the 2nd child and oldest son of Jesse F. Kight and Mattie Emma Dean Kight. His family spent his early years moving between Duncan and Pima, AZ. They moved with his paternal family until he was in 2nd grade, when his parents decided to make a permanent move to Pima. He loved the Pima area and traveled back all of his adult years to visit family and lifelong friends.

In 1942, he began dating the love of his life, Sarah Margaret (Sally) Follett. They married on January 18, 1943, while J.B. was home on leave from serving in the Army in WWII. Dad was assigned to a military police group charged with transporting German prisoners of war from Europe to different areas of the USA, crossing the Atlantic 3 different times.

J.B. and Sally welcomed their oldest child and beloved son, J Michael, in 1947, in Safford, AZ. In late April, 1951, they were transferred to Farmington (where they remained until their deaths) and added their youngest child and daughter, Marsha Gae, to this loving family.

J.B. began working for El Paso Natural Gas Company and traveled laying pipelines throughout AZ, NM, and Texas. He was a devoted and proud employee of EPNG San Juan Division in Heavy Maintenance and retired in June, 1983. He was delighted to be retired longer than he worked for EPNG.

Sally and J.B. were able to travel throughout the US, Canada, and Alaska in their motorhomes for 22 years after their retirement. They were proud and devoted parents, grandparents, and great grandparents. Family meant everything to them.

J.B. had awesome cooking skills. We'll miss his fresh cooked tortilla chips, pico de gallo, apricot cobbler, and cookies. If he gave you his cookies, you were very special to him! His mantra for a long life was a Coca-cola everyday.

J.B. was precded in death by his beloved Sally after 71+ years of marriage, his parents, his 5 siblings (Fay Louise, Geneva, Kenneth Dean, Mildred Maxine, and Carol Joyce), his precious son, J Michael, and his many peers & friends from EPNG.

A memorial/family and friends reunion is planned for April 16, 2022 at 2:00pm at Farmington Funeral Home in Farmington, New Mexico. In lieu of flowers, please do something nice for your family!

Our family would like to thank Crane's Roost for their steadfast attention and concern while caring for our precious dad/grandpa.

To order memorial trees or send flowers to the family in memory of Jesse (J.B) Baron Kight, please visit our flower store.