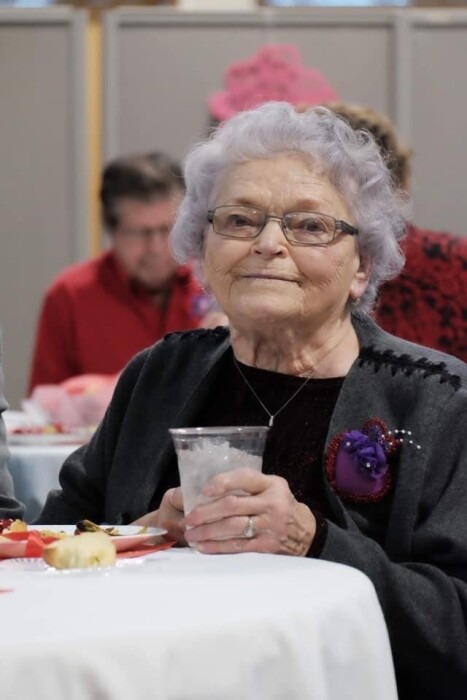 Joyce Alene Butts, formerly of Craig, Colorado, died January 15, 2021 in Farmington, New Mexico. She was 89 years old. A viewing was held at the Farmington Funeral Home on January 18. She is to be buried in the family plot in Iowa Park, Texas, on Saturday, January 23.
Joyce was born on May 10, 1931, in Iowa Park, Texas. She was the second child of Guthrie Brannon “Gus” Young and Minta Lou “Billie” Kight Young. She had an older brother, James Kenneth Young. Gus worked in the oil fields, so the family moved often and lived in many towns throughout Texas, Oklahoma, and New Mexico. They were living in Norman, Oklahoma in 1945 when the war ended. Joyce remembers the crowds of people celebrating in the streets, with the sailors and WACs from the Naval base located there. An exciting day for a teenaged girl.
Joyce was baptized into Christ at an early age and remained a faithful member of the church of Christ wherever she lived. She taught Sunday School for many years and always attended Ladies Bible Class. She had a beautiful soprano voice. When living in Monahans, Texas, she sang with a group on the radio during the church’s weekly broadcast. At the Northside Church of Christ in Farmington, she helped work with the World Bible School, sending out bible lessons all over the world.
Joyce graduated from Monahans High School in 1948. Her yearbook says she was active in the Homemakers Club, Chorus, and Pep Club. It was there that she met and married Oliver Wayne Butts on December 24, 1948, in Hobbs, New Mexico. They had two daughters, Joyce J’Lea in 1950 and Kala Lawayne in 1952. They lived in Monahans until 1965 where Wayne worked for Texas Electric and Joyce was a homemaker. They then moved to Hayden, Colorado. They were divorced in 1982. Joyce would later move to Craig, Colorado. It was there that she went back to school and finished a Secretarial program at Colorado Northwest Community College. She then got a job as a bookkeeper and the Shadow Mountain Trailer Park owned and managed by Colorado Ute Electric. When her daughter moved to Denver in 2005, and later Fruitland, New Mexico in 2010, Joyce packed up and moved, too.
Joyce was a devoted mother and accomplished seamstress and cook. She sewed many ruffled dresses for her little girls, using whatever scraps she could find, often making up patterns to match the dresses sold in the local Jack and Jill Shop. She would later make J’Lea’s cheerleading uniforms and wedding dress. She later took up quilting and made quilts for great grandbabies and other family members. She could feed more people from a pound of hamburger than anyone. She cooked for family, friends, and the sick. The family still prefers her meatloaf and vegetable soups over any other. Always involved in her daughters’ lives, she served as Brownie and Girl Scout Leader.
Joyce was a master gardener with two green thumbs. Her house was always filled with plants and rooting cuttings. She raised a garden wherever she lived, even in cold Colorado. When she lived in apartments, she raised vegetables in pots on her balcony. At her last home, in Fruitland, she had a real yard with beautiful roses and a vegetable garden. She raised tomatoes, green chilies, and watermelon. As long as she was able to get outside with a walker or on her motorized cart, she would spend hours picking weeds. Whenever she was temporarily in a nursing home to recover from illnesses or surgeries, she would go around pruning their plants and pulling weeds in their yard.
Joyce loved animals, especially her two dogs, Coal and Daisy. Living next door to J’Lea and Tim, she was able to hold many brand-new baby goats. She could also look out to the fields around her and see the neighbors’ cattle, sheep, and horses. And of course, the beautiful New Mexico sunsets.
Joyce started fishing at an early age with a cane pole. She fished the Brazos River and many stock tanks in east Texas. Fishing was her passion. She spent many hours wading in the Yampa River in Hayden and camping and fishing at Pearl Lake and Bear Lake near Oak Creek, pulling out one rainbow trout after another. After moving to New Mexico, she fished in the San Juan River. In later years she couldn’t cast very well because of her arthritis. J’Lea or Tim would have to cast for her and they never did it right!
Joyce loved her grandchildren and great grandchildren very much. Her house was full of pictures of them. She took pride in all of their accomplishments.
Joyce was preceded in death by her parents and brother. She is survived by her daughters J’Lea (Tim) Driver of Fruitland, New Mexico, their children, Harmony Driver of Aztec, New Mexico , Heather (Phill) Gisel of Springhill, Kansas and Joshua Driver of Farmington. Her daughter Kala (Dennis) Bugay and their children Jennifer Bugay, Jason Bugay, Sadie (Jr.) Herndon, and Jonathan Bugay, all of Craig, Colorado. She is also survived by her Great Grandchildren, Kaleb, Caden, and Madilyn Bugay, and MaKala, Brenna, and Jarek Herndon, all of Craig, and Alex and Jack Gisel, of Spring Hill, Kansas. She is also survived by her sisters in law , Joyce Young, of Rockwall, Texas, Opal Butts of Roswell New Mexico, and brother in law John (Jean) McInturff of San, Angelo, Texas, numerous nieces and nephews, church friends, and her special caregiver, Crystal Yazzie and her girls, Anastasia, Saniya, and Cadence, who made it possible for her to continue to live in her own house until the end.
Memorial Contributions can be sent to:
New Mexico Children’s Home
1356 NM-236, Portales, NM 88130

To order memorial trees or send flowers to the family in memory of Joyce Butts, please visit our flower store.
Send a Sympathy Card