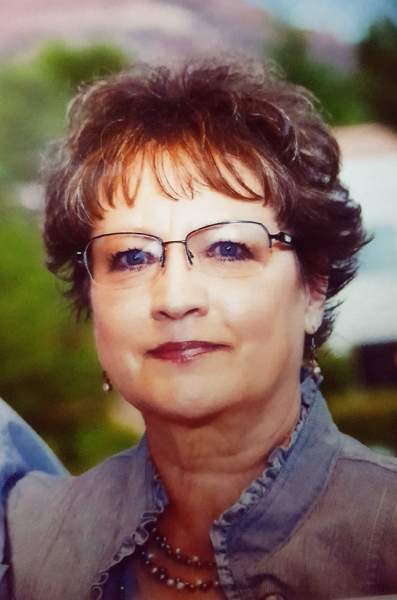 Judy Carol Sanders went to be with her Heavenly Father on May 14th,2020 after a long battle with cancer.

Judy was born on March 15th, 1946 to Wayne and Bertha Appling in Floydada, Texas.

She attended Lakeview Elementary school and graduated from high school in Floydada, Texas.

Attended Jessie Lee’s Beauty College in Lubbock, Texas where she graduated at the top of her class and received a special hair styling award for excellence.

Judy was raised on a cotton farm in Floyd County where she loved visiting with her grandparents, especially Sunday dinners with family. Her grandmother Birdie Marie was her greatest inspiration and the person she most admired.

Judy was a member of Bloomfield First Baptist Church where she taught Sunday School for 25 years. Was a volunteer in the nursery and served in several church committees.

Judy worked for Bloomfield Schools for 38 years as a substitute teacher where she made many lifelong friends.

Some of her fondest memories were those times she spent growing up with her sisters, playing paper dolls, dress-up at grandmother’s house. They have been her inspiration and support group.

Judy was an avid Dallas Cowboys fan- she supported them when they did well and when they did not. She loved doing crafts and making things for her family and friends, loved reading mystery books and listening to the oldies on the radio.

Her favorite time of the year was when she spent birthday and Christmas exchanges with her Yahya sisters: Donna, Shirley, and Dee Dee. It was the highlight of the year.

Her greatest blessings are her children and grandchildren who have given her great joy throughout the years.

Judy’s family would like to thank the many prayer and support groups that were there for her during her illness( many doctors and staff, Sunday School class, Church family, high school graduating class, family, friends) especially Dr Burns and Dr Imam.

Judy is preceded in death by her parents and grandparents.

To order memorial trees or send flowers to the family in memory of Judy Sanders, please visit our flower store.