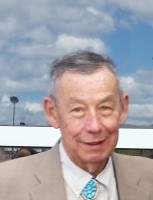 He enlisted in the U.S. Navy in 1960 and began active duty on September 28, 1961. He served aboard the U.S.S. Remey DD 688 as a Radioman 3rd Class. After active duty he served in the Naval Reserves and was Honorably Discharged in 1966.

Ken worked 47 years in public utilities. In 1964 he began with LILCO in Far Rockaway, NY until 1973 when he and the family moved to Farmington, NM where he worked at the San Juan Generating Station in Waterflow for Public Service Company of NM. He served as a Reserve Police Officer with the Farmington PD from 1977 - 1982. In 1985 he and Susan moved to Colorado Springs where Ken started work with Colorado Springs Utilities, retiring in 2007. Ken was getting restless at home and went to work from 2008 - 2009 at Holcim in Florence, CO. Then in 2009, he went to work for KIRA at Fort Carson, CO until 2011. In 2011 he decided to retire and stay at home.

Ken earned two Associate Degrees; (Business May 1978) and Police Science (May 1982) from NMSU - San Juan campus in Farmington, NM. In 1992 he earned his Bachelor of Science Degree in Organization Management. In 1997 earned his Master’s Degree in Business Administration from the University of Colorado at Colorado Springs.

In 1974 he and Susan were baptized at Emmanuel Baptist Church, Farmington, NM where they were members until 1985. In 1985 they became members of Heritage Baptist Church in Colorado Springs where Ken served as a Deacon. They moved back to Farmington in March 2013 and rejoined Emmanuel. Ken joined the Gideons International Farmington-Aztec camp in June 2013.

His hobbies were pistol shooting, camping, fly fishing, and cooking.

He is also survived, by his sister, Carol Amber, nephew, Rick (Lisa) Amber and great niece, Samantha Amber all from Oceanside, NY.

Preceded in death by his parents, William and Rose Denning.

The family would like to thank Dr. Jude Gabaldon, Basin Home Health and their 2 angels; Dawn and Fay, and Farmington Funeral Home with handling the cremation.

A Celebration of his life will be held at Emmanuel Baptist Church in Farmington, NM, August 22nd at 10 am with Pastor Steve Ballew officiating.

To order memorial trees or send flowers to the family in memory of Kenneth Denning, please visit our flower store.