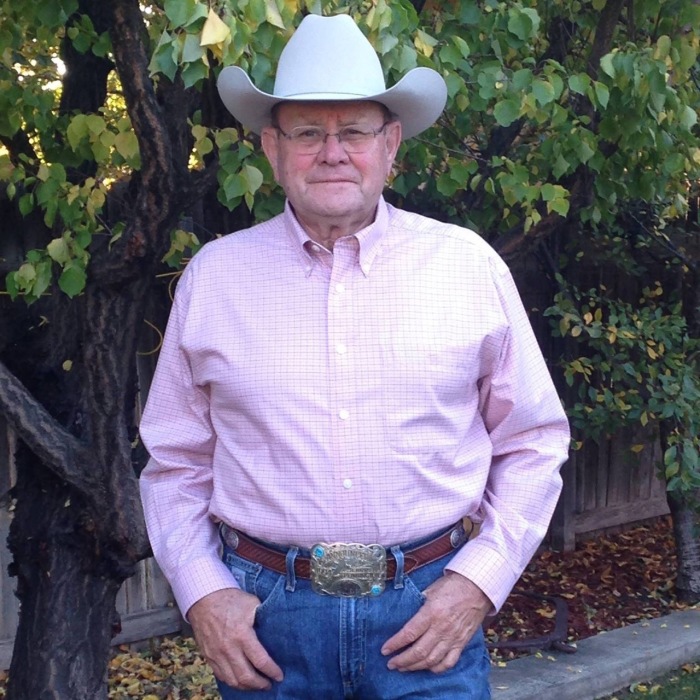 Larry Dean Pennington was born on August 21, 1942, in Dodge City, Kansas to Lyle Clifford and Stella Mae (Garrison) Pennington. He returned home to his savior Jesus Christ on Saturday, November 2, 2019, after a courageous battle with cancer surrounded by his family.

After Lyle’s passing, Stella married Charley Stipe and they moved to Farmington. Larry graduated from Farmington High School in 1961, where he was active in FFA and played basketball. Larry married the love of his life Shirley Dugan on March 4, 1967 in Farmington; they were married for 45 years and together raised three daughters.

In High School he spent his summers working as a life guard at Brookside Park Pool. In 1968, Larry received his pro rodeo card from the PRCA, and pursued his love of rodeo as a calf roper and in his later years, a team roper. After his rodeo days ended, he went to work for Universal Construction and worked on the building of Navajo Dam. He left Universal as a job supervisor in Gallup in 1976. He and his family returned to Bloomfield, where he served as a volunteer firefighter. He began his career with San Juan County, first at the Sheriff’s Office, serving as a deputy and a detective. In 1980 he moved within the County to manage McGee Park. It provided him an opportunity to promote both youth rodeo and Professional Rodeo, as well as bring other events in the county. He was a firm believer in keeping kids involved and out of trouble. He brought in the television show “That’s Incredible” to do a feature story on San Juan County Youth Rodeo and also secured the PRCA’s Turquoise Circuit Finals. He was also instrumental in attracting country singers to McGee Park including Reba McEntire, George Strait , Eddie Rabbit, and Jeannie C. Riley to name a few. While filling in for a youth rodeo announcer, Larry found a new passion and a way to stay connected to the sport of rodeo.

He attended the Western College of Auctioneering in Billings, Montana and became a local auctioneer, working with Bud Payne in Bloomfield and Calvin Story from Hesperus. Larry was thrilled beyond measure to learn that his daughter, Destre, was going to attend the same auctioneering college, and follow in her dad’s footsteps.

After years of announcing and auctioneering, he chose to go full time announcing rodeos. He traveled all over the southwestern United States with his rodeo dog, Skeeter. In 1993, he was invited to appear in the movie “The Cowboy Way” with Kiefer Sutherland and Woody Harrelson. He is featured in the opening rodeo scenes. In 2007, he along with both of his grandsons, Justin and Bryan Howlett, appeared in the ABC original family series “Wildfire”.

In 2001, Larry began working at San Juan Regional Medical Center in the security department. He enjoyed his time there and always had the kindest words for his co-workers. In 2015, his granddaughter, Makayla, joined him at SJRMC as a medic; both of them enjoyed working together until his retirement in October 2018.

Our dad did not rest much in life; he was always busy and lived a full life, but most of all he was a gentleman.

Funeral services will be held on Thursday, November 7, 2019 at 2:00 pm at Cross Roads Community Church, 2400 N. Butler Ave., Farmington, NM 87401. Potluck will follow immediately after the service. If you would like to bring a dish, please be sure it is Nut Free. Come share some stories of our father with us.

Our family wishes to thank Dr. Imam and the staff at San Juan Oncology. Also, thank you to all of the doctors who provided in his care. We would like to sincerely thank Pastor Les Cumiford; a very special thank you to Cross Roads Community Church for the use of your beautiful facility. To the many friends who have reached out with calls and thoughts and prayers….THANK YOU.

To order memorial trees or send flowers to the family in memory of Larry Pennington, please visit our flower store.
Send a Sympathy Card