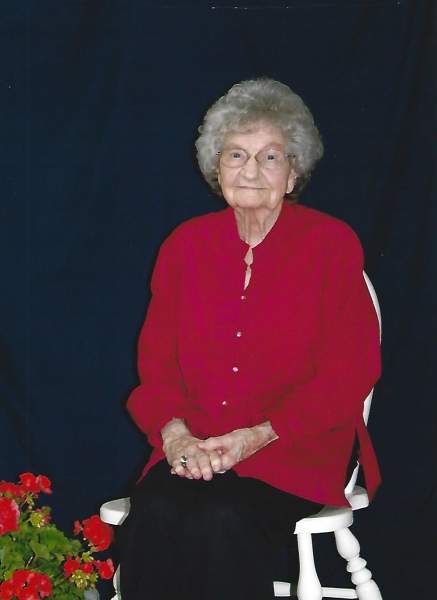 Our loving mother, grandmother, great grandmother, and -even great great grandmother Lorna Mae Wood passed away June 19, 2021 at the age of 95. She was born in Eager, Arizona to Forest Moroni Richey and Mary Eliza Nielsen on May 23rd, 1926.
She was a strong and determined woman despite experiencing grief as a young child after her father passed away when she was only six years of age. She would often remark at how much she missed him and wish she could've had more time with him. The family later moved to Farmington, NM in 1941, just after WWII began. It was in Farmington where she met and was united in marriage to William (Bill) Russell Wood in the year 1946, sealed in 1960. They were happily married for sixty-five years. Bill passed away in 2011.
She was preceded in death by all her siblings and parents. She is also survived by six children: F. Russell Wood (Ilene), R. Bruce Wood (Susan), Alicia Cundiff, K. Shane Cherryholmes, B. Kim (Shelley), and W. Trent (Velvet), as well as 18 grandchildren, 47 great-grandchildren, and 7 great-great grandchildren.
Lorna led a truly Christlike life as evident in her constant service to those around her. Some of her favorite pastimes were doting on grandchildren, constantly quilting and sewing, and table games with the family. Her favorite being 10,000. She supported her husband's obsession with all sports, especially high school basketball and football. They made sure to attend state playoffs every year. She spent countless hours cataloging and recording family history documents which she compiled into family history albums for every child and grandchild, hoping to pass on just a little piece of the family legacy that she held dear. Lorna held many positions and callings for her ward and stake. She always went above and beyond what was expected. As a result she has cultivated many earnest and sweet friendships over the years. The greatest legacy Lorna left behind was her love for the Gospel of Jesus Christ and her family.

To order memorial trees or send flowers to the family in memory of Lorna Wood, please visit our flower store.