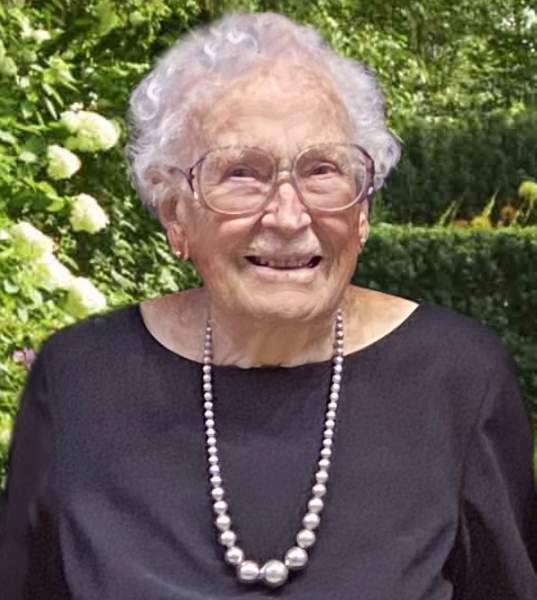 Madge Aretta McMillan fell asleep in the Lord one month and three weeks after her 100th birthday and awoke in Glory to be greeted by her Savior on January 17, 2022.

Madge was born November 26, 1921 in rural Colorado, Washington County, nearest to Otis, CO, (In the plains where the antelope roam, she would say) to Fred and Ina Graves, and siblings, Vanita, Harley, Newell, and Alona, all of whom preceded her in death. She was married in 1942 to Eulys "Mac" McMillan, who preceded her in death in 1972. She was most recently preceded by her son-in-law, Greg Neeley (Kathy) in 2021.
She is survived by her daughters, Eulene (Larry) Pruitt and Kathy Neeley. She was known as "Grandma Madge" to four grandchildren, Leann (Rob) Kern of Idaho, Brendee (Mike) Coley, Devin Neeley, and Ryan (Stephanie) Neeley, and four great-grandchildren, Bailee (Ben) Fehringer of Virginia, and Hudson, Brantley, and Lily Neeley.
Madge and family relocated to Cortez when she was 7-years-old. She graduated from Dolores High School. She met Mac in Cortez and they were married in Aztec before they moved to Farmington in 1952. She worked as a telephone operator in Farmington for many years as well as at Kirtland Air Force Base in Albuquerque. She worked with Mac in their jewelry store in Aztec and Farmington Pawn, learning watch and clock repair. She was an accomplished artist painting on everything from canvas to lanterns, brooms, glass, and rocks. The daily newspaper crossword puzzle was easily tackled, even if a few newer references needed consultation from a younger family member.
Madge had a green thumb and kept a garden, fruit trees, and a green oasis in her back yard. She delighted in baking bread (kneading was therapy for her) and feeding her family while being active in church and singing in the choir.
In 100 years, Madge was always up for an adventure. She loved to travel and took trips over the years to Germany, Holland, Italy, Israel, Paris, the Bahamas, and domestically to California and Idaho to see grandchildrens' weddings. At the age of 92, she saw the California sunset from the beach on her birthday. She loved to fish and go for picnics at Vallecito Lake in Colorado, play dominoes with the seniors' group, or go leaf peeping to see the colors change in the mountains.
Known as "Mur," she was always prim and proper while enduring endless ribbing, but getting her shots in too. She never shied from playing with the kids, she was eventually "GG" to the youngest great-grandchildren, whom she took great delight in spoiling.
Madge was a strong woman of God, her faith was never-wavering. Often she could be found humming hymns and her Bible was never far from reach. She constantly lifted her family up in prayer and was quick to praise the Lord for answered prayer.
Her gentle spirit and kind way will be missed by friends and family.

To order memorial trees or send flowers to the family in memory of Madge Aretta McMillan, please visit our flower store.