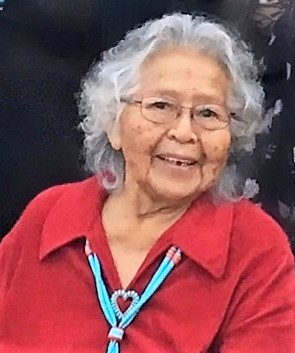 Marie Shondee was born March 5, 1938 in Kayenta, AZ to Homer and Mary Tinhorn. She was the oldest of four children. As a teenager she went to Phoenix Indian School where she met her husband Freddie Shondee. Together they had six wonderful children; Elsa, Frederick, Marlene, Franklin, Virginia, and Tammie. She spent most of her life raising her family with her husband in Farmington, NM.

Marie held multiple jobs throughout her life but her favorite job was being a mother. She had such pride in her family and loved them with everything she had. She truly had a heart of gold. She leaves behind her  children Elsa, Frederick, Marlene, Franklin, Virginia, along with Tammie and her husband Joseph SanNicolas. Marie also leaves behind her six grandchildren April, Zach, Lena, Selesa, Everett, and Lily. Along with many other loving family members throughout New Mexico and Colorado. She is preceded in death by her parents Homer and Mary Tinhorn, her husband Freddie Shondee, her sister Kathleen Stash, and her brothers Gary and Herman Tinhorn.

To order memorial trees or send flowers to the family in memory of Marie Shondee, please visit our flower store.
Send a Sympathy Card