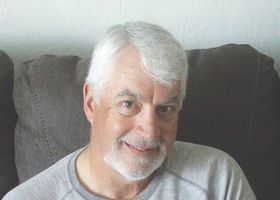 Farmington, NM. Mark was born to Marvin and Marjie Smith in Albuquerque, NM on October 9th,1961.

began in Farmington, took him to Clovis in 2003 for 18 years, and brought him back to

Farmington in 2020. If you knew Mark (which you probably did in some form or another) you know that he never met a stranger and that he could always put a smile on your face. He loved the Lord and most conversations led back to the Lord's love for us. He took every opportunity he had to go on an adventure. He enjoyed mountain biking and snowboarding and convinced many people to hop on the trail with him. He treasured time spent with his family both near and far.

Mark was preceded in death by his wife of 21 years, Molly, his father Marvin Smith, brother Ken Smith, and father-in-law Harvey Teyler, along with both sets of grandparents.

To order memorial trees or send flowers to the family in memory of Mark Smith, please visit our flower store.