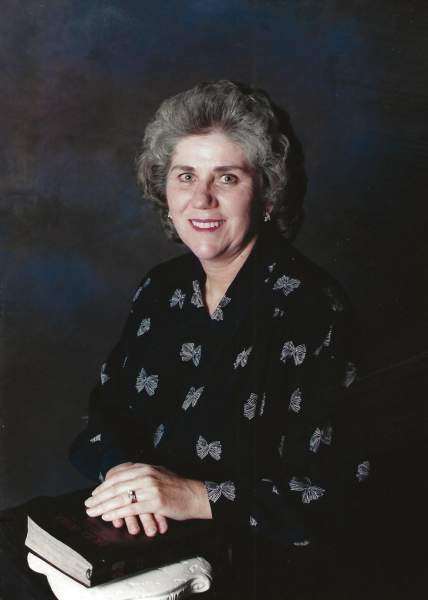 Nancy Marie (Turner) Bearden, 78, died peacefully at home in Bloomfield, New Mexico on August 18, 2021 following a long illness. The most important thing Nancy would want you to know is that she was a beloved child of God, redeemed by grace through faith in the finished work of Jesus Christ, confident in eternal hope, and is now resting with joy in the arms of Jesus.

Nancy was born on July 8, 1943 to Charles L. and Lillie V. Turner in Safford, Arizona. She and her brothers were raised primarily in the Bloomfield area although she ultimately graduated from Las Cruces High School in 1961 and then New Mexico State University in 1966. On July 24, 1965 she married her sweetheart, local boy Dale Forrest Bearden, who was then serving in the United States Navy. The wedding service was held at their home church, First Baptist Bloomfield and they began their married life in Maine.

After leaving the Navy, Dale and Nancy returned to New Mexico for school. Later, Dale's career in oil and gas necessitated frequent moves including Texas, Ohio, Colorado, and Oklahoma. During that time, they were blessed with the births of their daughter Debra and son Robert; and the couple later returned home to Bloomfield.

Although Nancy's degree was in Home Economics, she was always a social worker at heart. Over the years, she served as a case worker, activities director, counselor, and in other helping professions. She returned to school at Highlands College, completing a lifelong goal of a degree in Social Work in 2004 and started and ran a grief support group at First Baptist Bloomfield.

Nancy was preceded in death by her father Charles L. Turner, brothers Robert and Dale Turner, and infant children LaDonna, Brad, and Brian. She is survived by her husband Dale, daughter Debra and son Robert, their spouses David Ward and Lisa Bearden, and grandchildren Joel, Faith, and Eliana Ward, and Megan, Hailey, and Andrew Bearden. She is also survived by her mother Lillie Turner, brothers Wayne and Garland Turner and their spouses Evelyn and Carol, sister-in-law Jean Turner, and numerous nieces and nephews.

The family sends heartfelt thanks to First Baptist Bloomfield, members of the Joy Sunday School Class, Partners Assisted Living Services, and Basin Health Hospice for all of their love, care, and support through Nancy's illness.

Services will be held Thursday, August 26 at 10:00 am at First Baptist Bloomfield with a graveside service at Bloomfield Cemetery to follow.

On behalf of the family, if you wish to make donations in Nancy's honor please make them to the New Mexico Christian Children's Home, nmcch.org.

To order memorial trees or send flowers to the family in memory of Nancy Bearden, please visit our flower store.