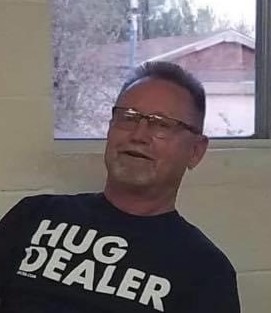 Robert Allen Hodgman II of Farmington, NM earned his Eternity Chip on Sunday, July 12, 2020. He passed at his home with his family’s loving support from his long struggle with cancer. Also known as Huggin’ Bob Hodgman, he was born September 11, 1958 in Cheyenne, Wyoming to Jessie Ellen (Wilson) Hodgman and Robert Alan Hodgman. Since his father was in the Air Force the family traveled to many places and Bob made friends wherever he was. He graduated from Maple High School in Lompoc, CA where he learned how to race motocross motorcycles. He eventually settled in Farmington, New Mexico to help his mother with her family homestead. Bob married Susan (Ames) in 1992 and together they raised a family of yours, mine, ours and fosters for the next 28 years. Bob had careers in substance abuse treatment and recovery and in flooring installation and sales, both successful due to his ability to connect to people in a positive manner. Bob was very active in the Recovery community, loved the people he worked with and led by example of what successful recovery from substance abuse looks like. He was a benefit to his community and was loved by many. Together with his wife, they started Masada House, Inc., a local transitional living program for women in recovery from substance abuse. Bob’s most favorite activity was to ride his motorcycle on the open road.

Bob’s welcoming smile and his sturdy and generous hugs are well remembered and missed by many.

No funeral is planned at this time due to Covid safety measures, but honorary pall-bearers would be John Mullarky, Guy Shepard, Chuck Wallace, Joe Hannan and Roy Green. A memorial event is in the works for September to coincide with National Recovery Month. Until then, the family wishes that everyone will stay safe and pass on the kindness demonstrated by Huggin’ Bob Hodgman.

To order memorial trees or send flowers to the family in memory of Robert Hodgman, please visit our flower store.
Send a Sympathy Card