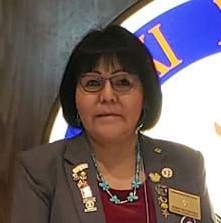 Robin Ruth (Ross) Waybenais, wife, mother, sister, grandmother, aunt, and nurse, passed from this life on September 19th, 2020 with her husband George Waybenais III at her side. She was proceeded in death by her father Edison Gene Ross and is survived by her mother, Betty J. Ross, her sisters, Debbie Fowler, Rhonda Burbank and her brother Autry Ross, her brother-in-law Emmett Fowler, and her precious daughters, Anastasia (Sweetpea) Waybenais and Audrey Ross; her grandchildren, Dion and Aiden Brow, and Emilio (Rambo) Herrera. In addition, she leaves behind numerous relatives, co-workers and friends who will miss her dearly.
Robin graduated from Shiprock high school and was active in cross-country. She joined the Marines after graduation and was stationed at Camp Elmore, North Carolina. After being a proud member of the Marine Corp for 2 years she was honorably discharged, and she went on to attend San Juan College and attained an associate degree to become a nurse. She was actively employed with the Northern Navajo Medical Center as an ICU nurse and previously was employed at San Juan Regional, Life Care and was also a traveling nurse for a period of time. She loved her job as a nurse and her caring and compassionate nature for patients was always foremost on her mind.
She met and married the love of her life George Waybenais III, on May 7th, 1988. They recently celebrated 32 years of marriage. During that time they traveled extensively to Las Vegas, took numerous cruises and rode their motorcycles when they could. She was also a proud member of the Elks for 6 years and was the Leading Knight for a year, before her passing.
Services for Robin will be at Oasis Ministries at 1601 N. Dustin Ave. B, in Farmington, New Mexico at 10:00 am on Saturday, September 26, 2020. Services will be live streamed for those who cannot attend.

To order memorial trees or send flowers to the family in memory of Robin Waybenais, please visit our flower store.