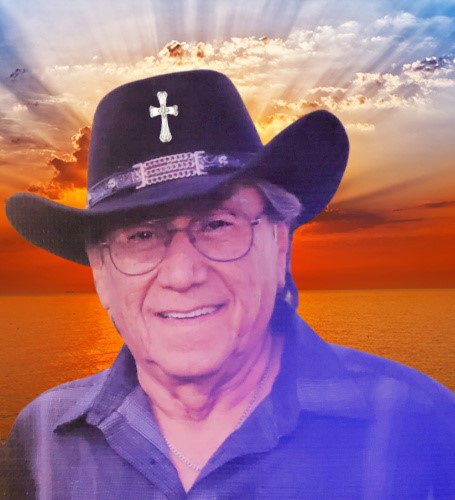 world on December 7, 2021 at the age of 79 in Farmington, NM. He fought a tough battle with illness

and decided he was "ready to go meet Jesus face to face".

Sav' was born May 2, 1942 in Cedar Hill, NM to Benito and Cornelia Martinez. He was the youngest of 8

children. After graduating from Aztec High School, he continued his education at Highlands University in

Las Vegas, NM and later with the British Institute of Hypnotherapy & NLP.

Sav' joined the Army and proudly served our great country for 8 years, leaving with an honorable

Shortly thereafter, he met and married the love of his life, Janice Geremia, in August of 1965 in Las

Vegas, NV. Sav' was working at the Nevada Test Site at the time. (He would never tell us any secrets

from his time working at Area 51.)

Sav' had a great passion for music, and the Lord Jesus Christ. He became an ordained Reverend later in

He loved hosting karaoke(at the Aztec VFW for the last few years), and was known for his jokes,

infectious smile, and his compassionate spirit.

Sav' was preceded in death by his parents Benito and Cornelia, brothers Felico, Felimon, Alonzo, and

He is survived by his wife of 56 years, Janice (Cherie Marie), his four children, Lori (Gary) Pringle,

A Celebration of his Life is planned on his 80th birthday, Monday, May 2, 2022, at Cedar Hill Baptist

To order memorial trees or send flowers to the family in memory of Saviniano Jose Martinez, please visit our flower store.
Send a Sympathy Card