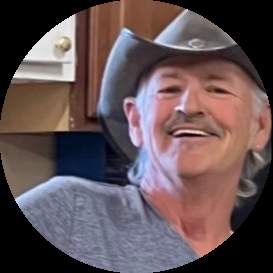 Our beloved troubadour was a born-again Christian and a veteran who served his country in the United States Navy. Clay had a passion for music and was gifted with an unforgettable voice. He became the center of attention at every event or family gathering when he brought his guitar, where he would shine the brightest up on the stage with his band.

Clay was preceded in death by his parents, Bill Clarence (Father), Frieda Freeman (Mother), and Bill Page (Father-In-Law). He is survived by the love of his life, his wife, Elaine Clarence, his Mother-In-Law, Nina Page, and his children, whom he loved very much, Cody (Brandi), Ryan (Kim), and Rachel Clarence. His stepchildren, Dylan (Jessica), Misty (Nate), Christa (Timmy), and also left behind to grieve his absence, are his best friends (his brothers), Chuck (Cindy), Larry (Joan), and Tracy (Wanda). Clay also had many grandchildren, great-grandchildren, nieces, nephews, cousins, in-laws, and friends he cherished.

A celebration of life will be held at First Baptist Church in Bloomfield on September 10, 2022, at 10 AM. In lieu of flowers, donations can be made to a charity of your choice in his name.

To order memorial trees or send flowers to the family in memory of William Clarence, please visit our flower store.